Posted in by Tudip at 08:05 Comments Off on Fundamentals of Cloud Network Address Translation (NAT)

Cloud NAT supports Google Compute Engine virtual machines as well as Google Kubernetes Engine containers and offers both manual modes where developers can specify their IPs as well as an automatic mode where IPs are automatically allocated.

Unlike the traditional NAT proxy solutions, the path from instance to destination for Cloud NAT has no NAT proxy instances. Instead, each instance is allocated a unique set of NAT IPs and associated port ranges, which are used by Andromeda, Google’s network virtualization stack to perform NAT.

Internally, Cloud NAT is a software-defined service that uses the Cloud Router resource to group the NAT gateway configurations. Could Routers do not actually perform Cloud NAT? The NAT is made by Andromeda, Google’s network virtualization stack, that allows an instance that uses Cloud NAT has as much external bandwidth as a VM with an external IP and the NAT gateway does not affect Cloud Router’s performance. 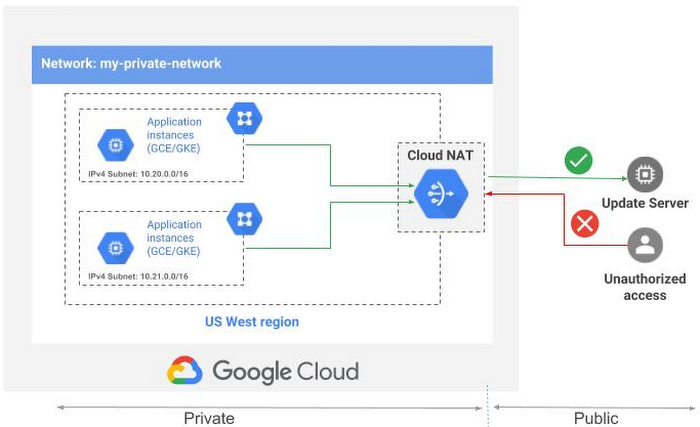 Cloud NAT allows Google Cloud Platform (GCP) virtual machine (VM) instances without external IP addresses and private Google Kubernetes Engine (GKE) clusters to connect to the Internet. Cloud NAT is a regional resource that implements outbound NAT in conjunction with a default route to allow your instances to reach the Internet. Hosts outside of the VPC network can only respond to established connections initiated by the instances and cannot initiate their own, new connections to the instances via NAT.

This way a secured cluster cannot be intercepted by the outside world but the nodes can get public internet resources using the NAT IP address. This IP address can also be whitelisted for the resource to which kubernetes resource wants to connect to.

Cloud NAT is to be priced per region. Pricing is based on the following:

Since the NAT is a single point of entry and exit into a network, the NAT box happens to be a performance bottleneck. Benefits of cloud computing cannot be denied, but the issues involved in it must also be considered to make this paradigm more acceptable.